So I have been asked many times to tell my story of how I found Islam and then became a Muslimah.  I have in the four years now that I have been a Muslim told my tale many times – to the point it seems unremarkable to me – not like an exciting ninja filled adventure or one involving national security or a buried treasure on some desert isle.  That is until it was pointed out just what an unlikely candidate I am for a convert to Islam.  Perhaps I should start where all good stories start – except this isn’t fiction or some random bed time story – its my life – from the beginning. 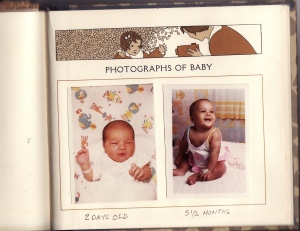 late 30’s.  My mother had just gone through 12 hours of highly painful back labor with minimal drugs – due to my father intervention – which my mother was unaware of -until the pain got to the point she couldn’t take it anymore and cussed out the nurse and told her to get her some @#$%%$# drugs!  I was two weeks late and probably would have stayed put until I was an adult if space hadn’t run out in my mom’s womb.

So I grew up with my mom, dad, my mom’s foster mom, her husband and their adopted son until I was around 3 years of age.  At that point my mom left my dad because of the verbal and physical abuse of her as well as his own substance abuse – needless to say we lived on WIC, Foodstamps and Welfare.  My father is a real winner – having already before I was born 5 other

children with three other women besides my mother – only one of he actually married (which wasn’t my mom).  Soon after my mom’s foster mom separated from her husband- so she and my mom moved in together in an apartment in Rogers Park,co parenting Dave and I until I was around 5 years of age.   At which point my mom’s foster mom decided to move back to Michigan and took Dave with her – our family relationship remains strong to this day – Dave is my little brother if not by blood.

My childhood was one in which I was always aware of my lack of a real relationship with my father.  I knew why my dad wasn’t around and I understood why we weren’t a family as a child.  It still didn’t stop me from wanting what I 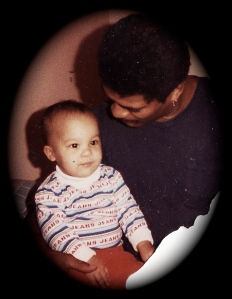 couldn’t have and my father only made it worse when he would randomly show up at our apartment after years or months of no contact and attempt to regain my affections with gifts and/or his charming manner – while smelling of pot smoke or alcohol and at times threatening my mother to gain access to me.  As a child I hoped that if I was good enough – maybe my father could over come his addictions and manipulative behaviors and we could be a family again.  I secretly harbored that hope and the hope he might one day walk me down the aisle at my wedding until around a year ago when I spoke with my father for the first time in 18 years.

It probably doesn’t need to be said that my mother is my rock.  It was she who is there for every important mile stone, challenge, fall and success.  My mom is the one who worked her butt off to get her B.S. in Computer Science to be able to support me and provide for us.  She was and is a lioness – when it comes to

protecting me and my interests.

As a child I wasn’t a kid who played well with others A. I am a only child – so sharing once Dave moved was a skill that wasn’t really fostered when playing by oneself. B. I was socialized to interact with adults as there were no children among my mother’s friends. C. I didn’t have access or an interest in a lot of things other kids did in terms of pop culture so I wasn’t aware of the things I needed to be in order to fit in among other things.

I attended an inner city public magnet school – Walter L. Newberry Academy which is a few block south of Lincoln Park and Lincoln Park Highschool.  I was the class nerd and I enjoyed school except for math and being teased mercilessly by my peers being made fun of for my lack of fashion sense, my “know it all” demeanor – jokingly called Encyclopedia Brown.  I also made fun of because I am bi racial and my hair is frizzy called everything from “Afro Puff” to “Oreo” because I was black on the outside by white on the inside – referring to my apparently lack of “black” mannerisms.

So I spent a lot of time reading books having found a way to escape my peers and recess.  The first book in which I encounter Islam is entitled Princess although Jean Sasson is given the title of “author,” what makes this book compelling is that is a real Saudi Princess’s account of her own life as a Muslim woman of privilege in Saudi Arabia I read this book when I was in fifth grade – so I was around 10 or 11 years old at the time.

Continued in the next post.. The Unlikely Convert  Part 2