Ok.. so I finally decided on a name for my dog.  I figure no one else I know is going to have a dog named fresh in Arabic.  Well no one else I know except one friend – has a dog who is Muslim.  طازج fits because she is spunky and highly energetic- always fresh and ready to go.

I was wondering what my mom was thinking with getting a new dog when I got the voice mail on my phone on Friday.

My phone never blows up like that – unless it’s an emergency – other than that I am lucky if I get a single call in a week.  Guess its good for the phone bill – never went over the family plan minutes.

I think my mom knew what a sucker I am for animals – let me say not all animals – just some animals specifically dogs, horses and hedgehogs more than others.  Something small, soft, furry, vulnerable and with big eyes – how was I supposed to resist that?!

I had practical worries – like if I end up going into the Peace Corps.. I don’t want to give  طازج away. I think that would be a pretty shameful thing to do after I rescued her, bonded and now am taking care of her.  So it was good to know my mom and her partner said they would care for her while I was away.  Then I was asked by my friends – what would I do if I get married with     طازج ? – Love me – Love my dog – is the answer.

As for moving or traveling abroad permanently – I guess I will cross that bridge when I get to it.

I have been living with dogs since before I became a Muslim and I have figured out how to maintain a clean place to pray – while sharing that space with dogs – Alhumdualillah Poodles don’t shed – So no hair issues.

طازج is already settling in and making friends with Kirby – who I caught sharing a dog bed with her.  Right before she tried to invite herself along to the Prison Dawah Dinner and Taleef by scurrying out the front door before I could close it behind me.

It’s really nice to have someone who is excited to see me and has her tail wagging a mile a minute – every time she sees me come home. The past two days she hasn’t been feeling so well because we switched her to a different food – before we put her on the raw diet.

So I have been up with her at 3am – 6am – 8am making sure she goes out and does her business and vomits outside if I can help it – which so far – only one accident.  She is a trooper.  Although she isn’t going to like going to see Dr. Han tomorrow – our vet – who will give her the once over and then from there – if she hasn’t been spayed – get spayed, microchipped and her teeth cleaned sometime this week.

She also alternated between barking and whining for almost two hours, when I crated her last night after the 3 am potty break – where she was sick again.  She was angry because I decided she needs to be crate trained and that she couldn’t sleep at on the bed – because I really don’t want to clean up a mess from a sick dog on my bed.  I ignored it because she needs to know – who is Alpha and how to stay in a crate for when I move and get a place of my own and I am working.

My cousin thought, “Oh its cruel to crate your dog,” that was until she had to pay for the damage her dog did to her apartment.  Over $2000 worth of damage from chewed base boards to tile ripped off the kitchen floor – never mind the stained carpet.

That’s not happening to me.

Also I am going to have to do some shopping – since she is so tiny- we don’t have any dog coats that fit her and with her recent hair cut or should I call it butchering? She is colder than normal. So a new coat or two is in order.  I will also be working on obedience training as I refuse to have a dog that doesn’t obey basic commands.

My mom already got her a new collar – now all she needs is some bling to fit in with the rest of the Poodle Pod.

So طازج is here and going to stay. 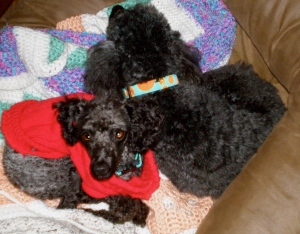